As a beginner, it's important to take every single advantage you can. Golf can be a frustrating (and expensive) sport, and finding a good set of hybrid clubs can make a big difference. Keep reading to discover what we found to be the best hybrid golf sets for 2021.

It hasn’t been long since hybrids have been first introduced to golfers, but their popularity is proof enough that they are very useful for players of all age and experience, but especially for high handicappers and golfers of average experience. Hybrid golf clubs are also called utility clubs and rescue clubs.  Based on my logic, they must be called that because of their usefulness in many different situations. They come in handy when all other clubs in your bag fail to get the job done effectively. In fact, hybrids are so useful that most golfers i know, including pros, assuredly have one in their golf bags at all times. Hybrid golf clubs have come long way since 2002 (the year TaylorMade released first hybrid to the market). They have now reached the point at which, if you’re high handicapper or a beginner golfer,  it doesn’t make sense to not have one in your golf bag.

The reason for why they came to exist is simple – hitting long irons properly is incredibly hard and many beginners struggle with them to this day. Now, they have alternative. Hybrids offer the best of both worlds – Irons and Woods. Best hybrid golf clubs made for high handicappers offer superior accuracy and greater distance than most long irons. Frankly, the results achieved by using the latter can only even be compared to results achieved by Hybrid if you’re a pro and know how to hit irons perfectly. Compared to fairway woods, utility clubs also offer superior control. More and more people are ditching long irons for hybrids and that trend is likely to continue in the future. This is my personal guess, but based on what little i know about economics, as demand for hybrid clubs rises, so will the level of quality and design of utility clubs produced by competitive market. Superiority of game improvement hybrids is clear today, and the difference is likely to become even clearer in future.

Because of this versatility of hybrid golf clubs, even professional golfers usually have one with them now. For example, Tiger Woods, the golf legend, used rescue club on one of his recent tours. If you push yourself enough, you can easily outgrow even the best of hybrid clubs and be ready to move on to long irons. Although, it must be stressed that when you’re just a beginner, best hybrid golf clubs for high handicappers are definitely the ones you should play with. Switching from hybrids to long irons is very simple, because club manufacturers usually include the information about which golf clubs their hybrids are supposed to replace. With that in mind, you can rest assured that you’ll always be able to switch easily in case you outgrow your hybrid clubs. Utility clubs are also very popular among women golfers, professional and amateur alike. Pro women golfers seem to like it even more than their male counterparts. While male professional golfer players tend to carry just one hybrid in their golf bags, ladies usually have two or more.

All of this is not to say that as a beginner golfer with high handicap, you must replace all your irons and fairway woods with hybrids. Instead, i think three of them are most effective when used in tandem. On the golf course, you’ll encounter many situations in which one of the three will be clearly better option than others.

Being one of the newest golf clubs and one of the most anticipated hybrids of past few years, this club has been named as one of the best utility clubs for high handicappers. It comes with built-in JailBreak technology, the merits of which in improving your game are hard to debate. What this technology does is hard to explain in detail, but basically, there are two jailbreak bars inserted inside the head to stiffen the body of the club head. This gives significant power to your shots, making your golf ball fly faster and cover longer distances. Unique design of the face cup will make your shots faster, too. Except for other great qualities, these two features alone, coupled with each other, are enough to qualify this club to be on the short list of best hybrid golf clubs for beginners. It should also be emphasized that designers of this club have done brilliant job of positioning center of gravity lower, thus greatly simplifying the hard task of launching your ball high up in the air.

The design of these clubs is centered around brilliant RIBCORE technology, which gives it many advantages over other clubs of the same category. First of all, this technology facilitates the transfer of energy from the club head to the ball upon impact. This ensures longer distance and accuracy. The perks of RIBCORE design stretch over to aesthetic qualities as well. Stiffened club head feels and sounds much better when you hit it. Club head weighting is another important part of any Hybrid club, and this club doesn’t disappoint in that regard as well. Its smart design provides more forgiveness by altering MOI to player’s favor. This is especially important for beginners, thus making this set one of the best hybrid golf clubs for high handicappers.  If all of that wasn’t enough, clubs in this set come with above-par shafts that ensure proper launch and high velocity for your golf ball once you’ve hit it. Granted, this is one of the most expensive options on my list, but you should also keep in mind that this is a combo of hybrids and irons. There is individual hybrid available to be bought as well, which can be found here.

The main feature of Adams Tight Lies hybrid is probably famous Ghost Slot Technology. What i and Adams means by that is simple, yet brilliant improvement in design of hybrid clubs – hiding crown slot while managing to retain all the advantages, such as superior forgiveness and faster ball speeds. Other than that, another of this club’s important qualities is it’s upside-down design. This specific design makes room for large impact area in the lower part of the clubface of this club. Three level sole is another important feature worth mentioning. This feature allows you to hit well even when the ball is stuck in less-than-perfect spots. Overall, this is definitely one of, if not the best hybrid club for beginners, and it’s lower price, compared to other options on this list, makes this hybrid even more attractive for budget-conscious buyers.

This hybrid club was released by Cobra in 2017 and it remains one of their best hybrid clubs for golfers with high handicap to this day. Uniquely positioned center of gravity coupled with its fixed weight guarantee exceptional forgiveness and maximum distance. Cobra F7’s reviews speak for its quality – it is one of the best-rated hybrid clubs online and customers have nothing negative to say about it in their reviews. The club’s face is made of stainless steel material, which further increases speed of golf ball and distance on off-center shots. Trademark feature of this club is probably MYFLY8 adjustable loft. As you can probably guess, this allows you to set the loft to the setting most convenient for you. You can also get newer 2018 model of this club, but it is a bit more expensive and personally, i can’t find anything wrong with this one.

Cleveland, once famous for its woods and irons, hasn’t released new clubs in a while, so this hybrid and entire HB series can be considered as their comeback clubs. While they probably weren’t busy with r&d to make these clubs during all those years of hiatus, we can still say with confidence that these clubs were worth the pause. In this case, it’s the HB Hybrid in particular that interests us. It’s HiBore crown allowed designers of this club to perfectly position center of gravity, which in turn, made it possible to increase forgiveness. Other hallmarks of this hybrid are its unique flex-fins, which negates the negative effects of your mistake when you hit the ball from a bad angle. Granted, it is one of pricier options on the list, but it’s common knowledge that quality is expensive, and if it’s any consolation at all, packaging includes headcover for the hybrid.

Benefits of using hybrid golf clubs as a beginner

High handicappers, who usually tend to be new to the game of golf, usually don’t have the necessary skills to hit long irons well, probably due to lack of experience. That’s why so many of them prefer to use forgiving hybrids instead. Hybrids allow some room for mistakes and less-than-perfect shots, so they are natural choice for high handicappers. The design feats achieved by hybrid manufacturers allow players to launch golf ball higher than they otherwise would and also increase overall distance traveled by the ball. My rule of thumb is that, the higher your handicap is, the better your results will be when using hybrids. There are many more uses for hybrids and even professional golfers use them now, but overall, they are perfect replacement of long irons for beginners. 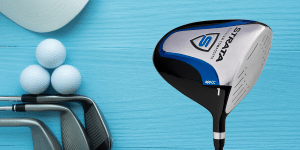 If you’re new to golf or want to upgrade your old clubs, the Callaway Strata set might have caught your eye. Callaway is one of the biggest names in golf and their Strata package set is a real favorite amongst beginner golfers. In this article, you’ll find my full Callaway Strata review which will give you all the information you need on the popular package set.

So, you’ve done it, you’ve crossed the bridge! You are no longer a ‘beginner’… But now you’ve got a few decisions to make. Your upgraded set has to be advanced enough to take you to the next level, but not so advanced as to trash your game. We’ll give you a run through some irons, look at complete club sets for intermediate golfers, and answer some really common questions about choosing a complete golf set.