TaylorMade MC is the latest and greatest from one of the top names in golf. For single-figure golfers, we feel that these are ideal as they give forgiveness with an element of playability to shape shots and give excellent feedback. Check out our extensive review of these compact irons.

For a long time, golf balls came in 2 forms. There were “wound” balls with liquid cores, favored by professionals and low-handicap club golfers for their feel, extra backspin and maneuverability when shot-shaping. In contrast, there were “2 piece” balls with solid cores, excellent for long drives and overall distance. 2 piece balls tended to go straighter, even when hit improperly.

The golfers who chose to play with 2 piece golf balls were largely mid or high-handicappers who wanted distance and accuracy. But it could be embarrassing, even as it helped the bogey golfer shoot a reasonably low score. 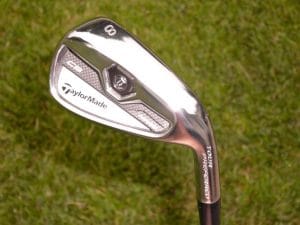 The hacker might manage to poke his drive long and straight, but still had to deal with the lower status implied from using the “beginner” ball. The snob would sniff and say, “I just prefer the feel of a wound ball, like my idol Tom Watson” – before hitting it into the woods, or short of the target.

Around 20 years ago, golf ball-makers began to experiment with “hybrid” balls that combined the 2 piece and wound models, increasing spin and precision while maintaining some power and control. And so the Top Elite “Tour” model golf ball was born, which high and low handicappers alike could play and feel satisfied with.

Irons and wedges have gone through a similar transition. For decades, irons were fashioned in 2 disparate forms – “forged,” or blade designs that looked especially pretty, could be used to hit crafty shots – and squibbed the ball 30 yards into the trees when badly swung, and “cavity back” irons which afforded little of the feel and precision but could knock a fairly straight and long shot towards the green even on a badly-hit shot. Hackers used the cavity-back irons which were weighted for forgiveness and accident prevention, while scratch golfers used the forged finesse weapons.

But that began to change as well. Club designers began to experiment with hybrid-style irons that could offer the best of all worlds – feel, precision and forgiveness.

Long known as a “weekend warrior” club maker, TaylorMade stepped back into the irons and wedges market for scratch golfers and club professionals earlier this decade with the MC series. However, TaylorMade retained some of their mid-handicapper-friendly design in the set with the inclusion of the Speed Pocket, or a weighted bar on the low end of the club face, for the longer clubs. That is either a blessing or a curse, depending on your point of view. Many pro and scratch-amateurs prefer no-frills forged irons, end of story. Meanwhile, the look and feel of a blade-like iron can intimidate some high handicap golfers out of trying the clubs.

But there’s a sweet spot (excuse the pun) for a low or mid-handicap golfer looking for a distance and accuracy boost while retaining the ability to “make shots,” or curve the ball flight around hazards on its path to the flag. Is the MC series right for your game?

TaylorMade MC “Tour Preferred” irons come with steel shafts, and a 3 iron through pitching wedge – no sand, lob or “A” wedges here.

Most serious hobby golfers who have tried the MC irons have been pleased. However, there are some concerns with the consistency of the short irons vs. longer irons. The longer clubs come with the Speed Pocket, meaning that they hit the ball at least half a club farther.

However, the bottom-heavy weight can lead to mis-hits if the golfer is not prepared to make a long, sweeping swing. As with the RocketBladez and SpeedBlade irons by TaylorMade, players who attack downward onto the ball will struggle to adjust to the Speed Pocket.

But the short irons are true “forged” clubs, giving players maximum consistency in distance control and a great feel. The only downside is that a mis-hit will result in calamity, as there is no safety built into the short clubs to correct the ball flight on a bad swing. However, short irons are also the easiest club in the bag for any golfer to swing with relative consistency.

For the Low Handicapper

Let’s be practical for a moment. While it’s true that theoretically, golfers with seasoned swings who always tend to strike the ball solidly should want the maximum control and shot-making ability of traditional forged irons. But who’s to say a set of irons that correct your misses and provide a slight distance boost aren’t a good investment?

If you play every day, stick with your conventional blades. But for the low-handicapper short on practice time and playing marathon torture tracks, try the Speed Pocket. More of your approach shots will finish center-green instead of in the front bunkers.

For the High Handicapper

The MC irons may be ill-suited to the novice, because even short irons take some time to learn to hit solidly and consistently. However, they are excellent “graduation” clubs to buy yourself as a reward the day you break 90 for the first time.

For the Power Hitter

This is a tough call. Whether or not the MCs are a good choice for the long hitter depends on your individual swing, and the courses you like to play.

If you are a muscled-up player who is long off the tee but struggles with the finesse game, you may want to avoid playing the forged short irons and wedges of this line. But for golfers who are long and wild off the tee and with longer irons, the MC series might be just the ticket, boosting your shots straighter and longer out of the rough while allowing you to work a wedge toward the flag even from a bad angle in the fairway.

For the Short Hitter

Now we’re talkin! TaylorMade MC irons can be a terrific fit for the straight hitter who needs all of the distance you can get on longer shots.

175 yards from the green? No problem. The 3 and 4-irons will crack a longer-than-usual approach shot toward the flag with a maximum-efficiency trajectory. But on Par 5s and short Par 3s, the sweet-feel design of the short irons and wedges will give you the best chance to make birdie.

More birdies from close range, less bogeys from far away – what else can the finesse player ask for?

Back in 2014, Callaway brought out their first edition of the hugely popular forged “players” distance irons. These were one of their best-received sets of irons ever and it’s great to see that they’ve released a brand new set of Apex irons for 2021. In this article, I’ll be reviewing the Callaway Apex 21 irons to explore just how good they really are.

Are there a few irons in your bag that you only ever pull out reluctantly? Yeah, me too. Man, I hate having to hit that 4-iron. If only there was a combo set that offered a mixture of game improvement, forgiveness and performance? Well, there is. The Srixon zx irons offer all of this, and maybe more? I’ll take a deep dive into what you can expect in my Srixon zx irons review.