As simple as it seems, putter isn’t all that simple, thanks to the many different styles of putters available on the market. By customizing your putter to fit you best, you’re taking action to make yourself a better player with better numbers. Here are our top recommendations for Best Putters for Women.

Putter is extremely important part of every woman’s golf club set. You could say that all clubs are equally important, but in my opinion, some clubs are especially significant and putter is one of them. In case you don’t already know, putter is the club you use to finally deliver golf ball to the hole. Final shot is extremely important and getting it right might make a big difference in your results. That’s why i think choosing the best putter as a woman is so important. On the other hand, best can mean different things to many people, so i don’t think there is one particular putter that will work for everyone. Rather, there are few excellent putters for people with different needs. I chose to review three of them today, hopefully at least one of them will match what you’re looking for. If not, you can read other tips and tricks i’m going to share to help yourself while choosing different putter. I should also note that putters can take a little bit long to get used to, especially if you’re going from light putter to heavy one(or vice-versa), or if you’re switching between putters of different head shapes. So if it doesn’t work out straight away, it might not be putter’s fault.

With that being said, putter alone can’t fix your game. In golf, as in most sports, it’s mainly the practice that improves your game more than anything else. Quality and design of golf clubs is of course important, but that only comes into play when you know how to hit clubs properly. Despite that fact, there are some golf errors that putters can fix. Best ladies’ putters are usually very forgiving, which means that they reduce the impact of bad shot on your overall outcome.

Mastering the art of putting is extremely important and luckily, also very easy. It takes a lot of practice, of course, but unlike other long-distance shots, to practice putting you don’t need that much of a space. There are many putting aids and mats that you can set up indoors to achieve complete mastery of this skill. Some golfers set up these things in their backyards just to have fun. I don’t have one myself, but my friend does, and we have great time every time i go visit him at his home.  Putters also make very good gifts – Christmas is coming up soon, so if you have someone special who likes to play golf, keep in mind that putting mat, putter, or both, will certainly make a great gift.

Choosing the best putter as a woman depends on the type of your stroke more than anything else. There are two basic types of stroke – one when the ball goes straight, and the other during which ball creates slight arc on its way to the hole. Face balanced putters were created for ladies with straight-to-straight strokes. Toe-balanced putters, on the other hand, work great for golfer women whose strokes have slight arc. Determining what type of stroke you have is fairly easy, but it requires physical demonstration, which is impossible in this blog post. So if you don’t already know, ask someone experienced or seek out golf instructors.

It’s also important for putter to be aesthetically pleasing to look at, but its colors can and should also serve greater purpose. Well thought-of color palette can really help your focus when you’re hitting the golf ball.

The amount of weight that your ideal putter should have also depends on your swing. Women usually don’t choose very heavy putters, because hitting them takes a lot of power, which makes your shot unpredictable and inaccurate. On the other hand, you don’t want your club to be too light – shots will lack any consistency. These are two extremes, obviously. There are some ladies who like a bit of extra weight, and there are others who prefer lighter putters. It all depends on your physical characteristics and style of playing golf. You can try out many different putters at retail stores. That might be helpful in determining the right weight of putter for you.

Just like the weight, length also depends on your individual characteristics – mostly on length of your arms. Average for men’s putter is 34 inches. There is no exact number for women, but putters for women obviously have to be shorter than the ones for men. Solution to this confusion is to buy putters in person, rather than ordering them from online store. But if you don’t, that’s not a deal-breaker either. If you buy a putter and it turns out to be too long for you, most local golf club servicemen can fix it for you by cutting off an inch or two.

Best Putters for Women in 2020

Tour Edge released this putter just few years ago, and since then, it has become one of the most popular putters on the market. It is standard 33 inch size, so if your height strongly deviates from the average, you might need to have it shortened. It costs slightly more than cheapest putter on this list, but overall, compared to other putters of similar makeup, it’s price is competitive and fair. Official page on Tour Edge site makes promise of many performance enhancing features, which doesn’t seem unlikely, considering how well customers rate this product.

At the time of writing this, PGX putter is the cheapest of the three. Nonetheless, quality of this putter is unquestionably high. This putter’s build and design are simple yet powerful. It is also helpfully colored to help you with alignment when you’re hitting the ball. This is great option both for people looking for first, main putter, and because of it’s price, for those looking for backup putter as well. It is weighted to be more forgiving, so i think this putter is the best for beginner ladies.

Despite its high price tag, this club doesn’t disappoint. It is one of the latest putters released by Callaway and it already managed to become favorite of all women golfers all around the world. There are many different lengths available, from 32 to 34 inches, so you should be able to get the size you want. It has eye catching design and luxurious look, It is a little bit heavier than most putters for women, so it makes room for a little bit more control than usual.

Which golf club is your favorite? Your driver? Your trusty 7-iron?… Let me tell you something.

It should be your putter. After all, if you are a mid handicapper, you’ll play over one-third of your golf shots with it… Or over half if you play like me on a ‘bad day. The TaylorMade Spider EX might look a little funky, but it could just become your new favorite. Read on to find out why…

Ever stood over those nasty putts that can make or break your round, wishing you were more confident? Mallet putters offer plenty of forgiveness, and buying mine helped revive my putting. In this article, I’ve rounded up the best mallet putters on the market to date.

Putting. It should be so simple? Yeah right. Putting is probably one of the hardest parts of golf. Considering all that separates you from winning the hole is about 6 feet of grass, what could go wrong? Well, in my case, smashing it 7 feet straight past, followed by another two putts.

Callaway released a beautiful new set of Solaire clubs for 2021 – and we’ve got you covered with a full review and breakdown. 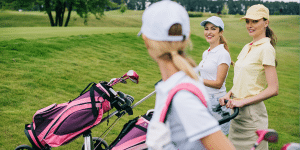